13 People Die In Fire Inside Fairmount Rowhome; 7 Victims Were Children

Thirteen people died in a fire inside a rowhome in the Fairmount neighborhood of Philadelphia on Wednesday morning; seven of the victims were children. At least two other people were injured.

The total number of people who died is “dynamic” while the recovery effort is ongoing, Deputy Fire Commissioner Craig Murphy, of the Philadelphia Fire Department, said during a briefing Wednesday. There were four, battery-operated, smoke detectors inside the property, and none of them were operational, Murphy said.

The fire happened on the 800 block of North 23rd Street, near the corner of North 23rd and Ogden streets. Firefighters were called to the scene at 6:38 a.m.. Crews arrived and found flames spewing from the second floor of the three-story rowhouse, according to the Philadelphia Fire Department.

One of the injured people taken from the property is a child who was taken to Children’s Hospital of Philadelphia. The other was taken to Temple University Hospital.

It took firefighters 50 minutes to get the blaze under control, and the investigation into the cause of the fire remains active.

Kyle Medernach, who lives on the block, said he woke up this morning to the fire.

“It was a shocking moment. Everybody here in the street was out watching first thing in the morning,” he said. Medernach did not personally know the people who lived in the house, but he often saw them outside.

“It’s just sad, what happened,” he said, adding his heart goes out to the families. “More than anything else, that’s what I’m thinking about right now. The victims, the families.”

There was no word yet on what may have caused the fire. Witnesses and officials on the scene told 6ABC that the building had been converted into two apartment units and during the fire, flames were pouring out of the building’s second floor window.

Preliminary information indicates companies arrived at 6:40 a.m. and found heavy fire coming from the second floor of a three-story rowhouse. It took 50 minutes to place the fire under control. More to come. 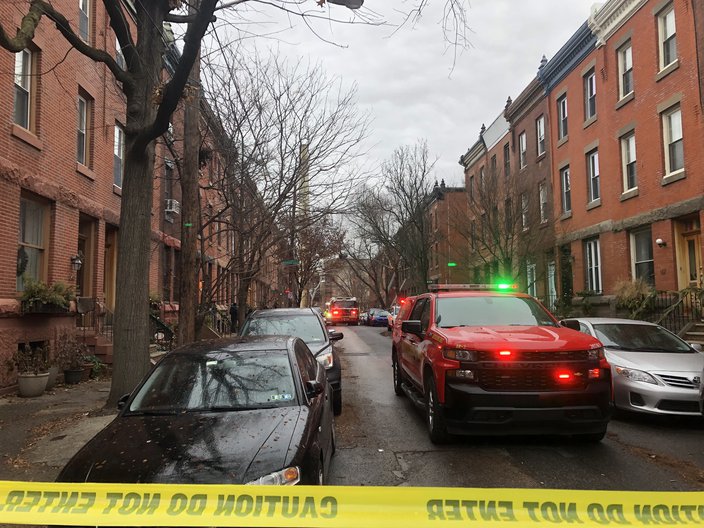 Wednesday morning 13 people died in a fire inside a home near 23rd and Ogden Streets in the Fairmount section of Philadelphia.

This story is developing. Please check back for more updates.