Events To Recognize Black History Month For Every Day Of February 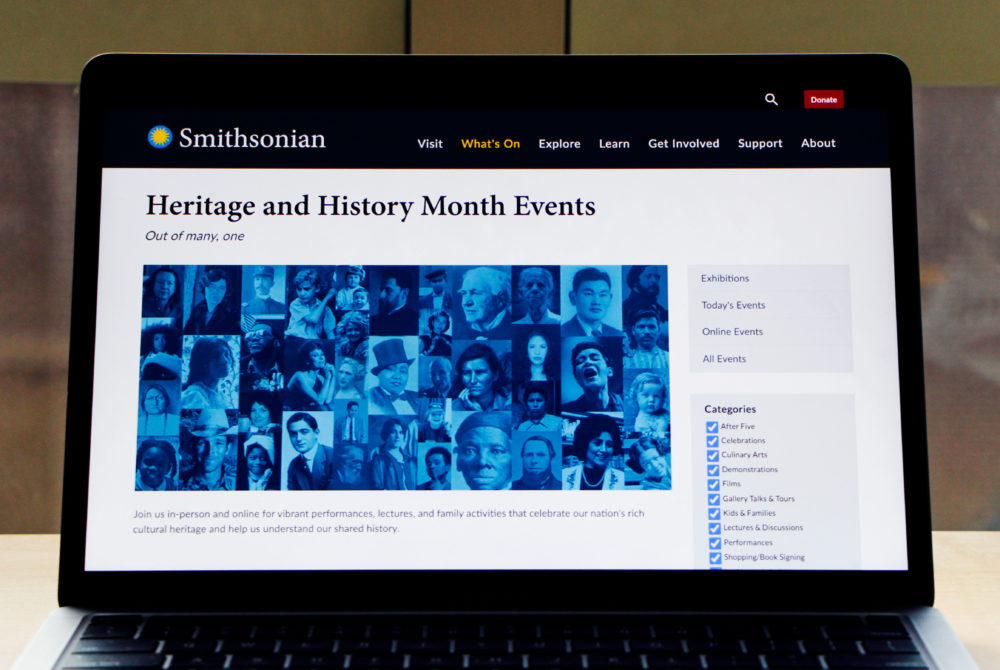 From events at the Smithsonian to live performances, recognize Black History Month around D.C. this year with these activities to put on your calendar.

Spend all February long recognizing Black History Month with a variety of in-person and virtual events throughout the District and beyond.

We’ve compiled a list of lectures, movie showings, poetry nights, walking tours and other culturally enriching activities to learn about Black and African American history and culture. From a walking tour about the history of Frederick Douglass’ life and a presentation on the impact of the Black Lives Matter movement to a brunch event where you can support Black-owned businesses, check out these events to celebrate Black History Month in the District and beyond.

Feb. 1 | I Dream a World, A Community Celebration of Black Poetry
Participate in the D.C. Public Library’s initiative to celebrate the work of Black poets by sending in a video reading passages from your favorite Black author.

Feb. 2 | Community + Conversation, with a Docent, Creative Griots
Join an online discussion to hear a docent from the African American Museum of History and Culture speak about African American performance, music, cultural expressions, visual arts and their role in fueling social change.

Feb. 3 | Manumission Tour Company Virtual Tour of Local Black History: Freedom’s Fight in Alexandria
Participate in a virtual tour of Alexandria, Va. to learn about the experiences of African Americans during the early days of Alexandria.

Feb. 5 | The Journey: Tales of Africa to America
Enjoy this interactive program held at the Arlington Public Library, which uses folktales to tell stories that “transport the audience from West Africa to the eastern coast of America.”

Feb. 6 | Walking Tour of Frederick Douglass’ Old Anacostia
Participate in a walking tour, led by historian and author John Muller, that explores the history of Anacostia, its folklore and the stories about the residents who lived there, especially abolitionist Frederick Douglass.

Feb. 7 | History Alive! Coming Home: African Americans Returning from World War II
Partake in the virtual event put on by the National Museum of African American History and Culture to learn about the experiences of Black veterans.

Feb. 9 | Make Good the Promises at Busboys and Poets – Conversation Featuring Kinshasha Holman Conwill and Paul Gardullo
Learn about the lasting impact of Reconstruction and voting rights and education equity at this virtual event hosted in collaboration with the National Museum of African American History and Culture.

Feb 10 | Dear Mapel
Buy tickets for this play performed by Psalmayene 24, a prominent player in hip-hop theater, about his coming-of-age story from Brooklyn to D.C.

Feb. 14 | Visionary Artists Of Color
Participate in a self-guided tour of the American Visionary Art Museum to view work by artists of color.

Feb. 16 | Virtual Film Screening and Discussion of “Odessa’s Reign”
Watch a showing of the movie “Odessa’s Reign,” which tells the story of a Black female gangster who runs a gambling ring in D.C. during the 1950s.

Feb. 17 | Community Talks: Measuring the Influence of BLM Protests with Dr. Bai Linh Hoang
Attend a presentation analyzing the impact of Black Lives Matter protests on policy changes in 100 of the largest cities in the United States.

Feb. 20 | HARRIET : Black History Month Free Film Series at the B&O
Attend a showing of the movie Harriet, the story of Harriet Tubman, put on by the B&O Railroad Museum in Baltimore.

Feb. 21 | City Within A City: Greater U Street Heritage Trail
Participate in a self-guided walking tour stopping by Malcolm X Park to celebrate the life and legacy of Malcolm X on the 57th anniversary of his death.

Feb. 23 | Honor the life of Rosa Parks at The Mansion on O Street Museum
Stop by this museum, a favorite of civil rights activist Rosa Parks during the time she spent in D.C., to learn more about her life and the civil rights movement.

Feb. 24 | Dream Big! An Interactive Playback Performance
Attend this event held in the Smithsonian Arts + Industries Building to hear about the dreams of leading civil rights activist Floyd McKissick through an interactive performance.

Feb. 27 | SELMA : Black History Month Free Film Series at the B&O
Attend an in-person showing of the movie “Selma,” which tells the story of the 1965 voting rights march from Selma to Montgomery, Ala., put on by the B&O Railroad Museum in Baltimore.

This article appeared in the January 31, 2022 issue of the Hatchet.