‘Our Hearts Are With Them’: Ukrainian Scouts Make First-Aid Kits To Ship Overseas 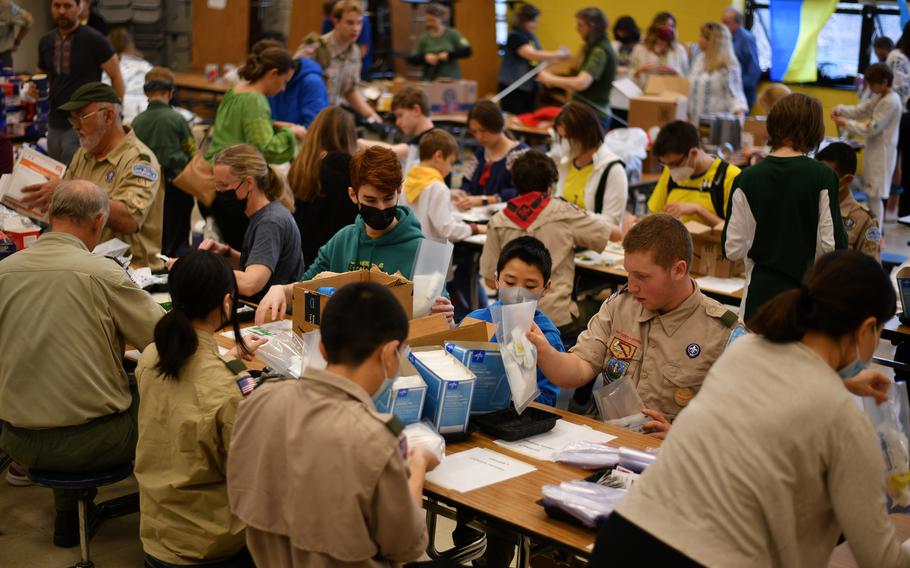 As Kalyna Mazal put gauze pads into a plastic bag, part of a volunteer assembly line making emergency medical kits to send to Ukraine, she was thinking, “This could save someone’s life — who knows?”

All around her in a middle school cafeteria Saturday, people in traditional hand-embroidered tunics — hers was entwined with bright red poppies — had their heads down, working quickly to stuff Band-Aids and vinyl gloves and antibiotic packs into clear bags.

Members of the Plast Ukrainian Scouting Organization-USA, a branch of the international scouting organization, gathered in Bethesda, Md., to assemble lightweight, portable kits that Ukrainian people could carry in a pocket or a purse and have ready if glass shatters or shrapnel flies.

They’re giving not only the supplies people so desperately need, said Leda Huta, a troop leader from Silver Spring, Md., “but hopefully they also see our hearts are with them.”

Many of the scouts have family in Ukraine, and all share a cultural and humanitarian concern, said Andrew Demidowich, a doctor who lives in Columbia, Md., and leads the local chapter, Plast DC. “You worry about not just the country surviving, but the people in it,” he said.

They know it’s important to donate money, he said, but many also longed for a more tangible way to help. Using their hands to craft the medical kits was better than just clicking PayPal over and over, Demidowich said.

Kalyna, who is 15, said she was relieved to be able to do more than just sit in her room, posting news stories to Instagram to keep her friends updated about the war.

“It’s sad that we have to make these,” she said. “But this could make a difference, if we get all these boxes out to Ukraine.”

The kits were designed by Dan Olesnicky, a trauma surgeon who is a Ukrainian scout, and many Plast chapters have been filling boxes with them in recent weeks, shipping them overseas to Plast Ukraine along with other aid.

On Saturday, the Bethesda school cafeteria echoed with the sound of mothers calling to their children in Ukrainian, the buzz of vacuum-sealers closing the filled bags, and the screech of duct tape being pulled and torn. Some tape was used to seal filled boxes of first-aid kits, some was wrapped around small pieces of cardboard to add to the bags to help craft a makeshift splint or stretcher, or other emergency medical aid on the ground. 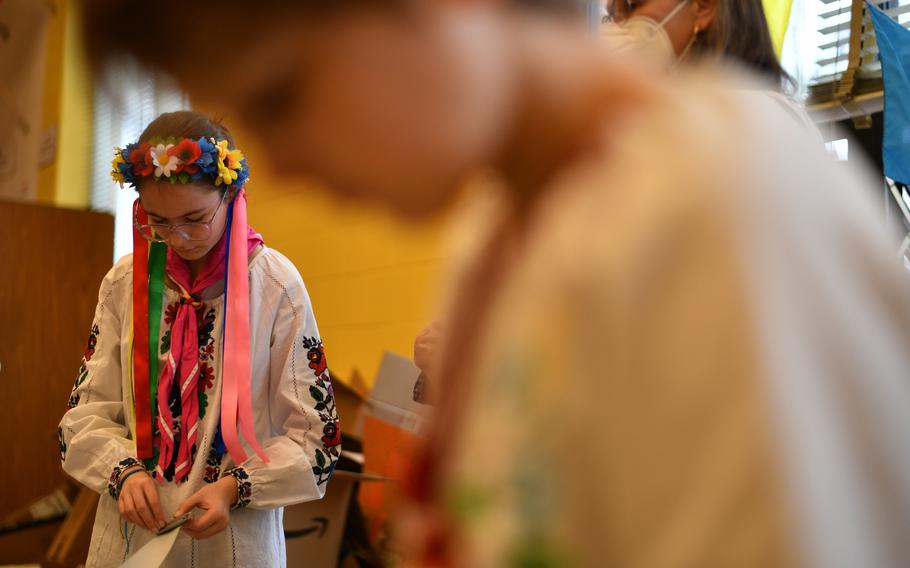 Melania Kolcio, 15, from McClain, Va., rolls 5-foot-long pieces of duct tape around a piece of cardboard for the medical kits. Duct tape can be used for wound compression and potentially save a life in a war zone. (Astrid Riecken/for The Washington Post)

A tiny boy in the traditional vyshyvanky tunic had his tongue partly out, concentrating as he unwrapped colorful rolls of gauze. A small white dog with a kerchief of the bright blue and yellow of the Ukrainian flag watched from underneath one of the tables, panting, as people worked quickly, some in the dark green Plast scout uniform.

Many girls wore flower crowns — vinoks — some with colorful ribbons trailing down their shoulders. A mom with bright flowers in her hair pushed a broom across the linoleum floor of Westland Middle School, sweeping up plastic wrap from medical supplies.

Boy Scouts in tan uniforms ran from table to table replenishing supplies. “Who needs Band-Aids? Who needs Band-Aids?” one shouted. Steve Fox, retired from the U.S. Foreign Service and an assistant scout master for Boy Scouts of America, reached out to Plast because helping and being kind are tenets of scouting, he said. “I know the value of person-to-person diplomacy,” Fox said, “and that is what this is.”

Plast was formed in 1911 but was not allowed in the Soviet Union, Demidowich said; some people met underground, and chapters grew in many countries.

Ukrainians and their descendants shared their love of Ukrainian dances, songs and food such as pierogi, kielbasa and borscht. And they shared an idea: “Resisting subjugation, fighting for your voice and freedom,” Demidowich said.

That fight for independence resonates with Americans, he said.

As a kid, while his friends were at soccer or baseball camp, he was having amazing experiences with Plast, he said — ice climbing, kayaking through Canadian rivers, building huge wooden structures on camping trips, ziplining, singing campfire songs in Ukrainian.

That connection to the shared culture “helps you transcend yourself as an individual, connect you to that rich tapestry your ancestors have been weaving for years,” Demidowich said.

Kalyna’s mother, Eva Mykolenko, had tears welling up as she looked at the room full of people — some who recently left the country, some who had never been to Ukraine and were generations removed — making the first-aid kits.

“Just like we’re seeing images of refugees escaping Ukraine, that was the exact situation my parents were in World War II,” she said, fleeing from the Nazis, and then the Russians. Her father was 8 years old when American soldiers told the family the war was over and the Russians would take them home, she said. “That night they took their one bag of stuff and ran into the forest. That was in 1945. Now it’s 2022. It’s heartbreaking.”

As a child growing up in Detroit the stories were unimaginable, she said; now, as a mother, she can better imagine the terror the families must feel.

She understood, too, why her parents had taught her the language and the culture and traditions. “Now we’re seeing why it mattered,” she said. “This is why you do it.” She looked at her son and daughter — in her ripped jeans and vyshyvanky — adding their supplies, handing the kits down to the next person. “Because now they see, ‘This is my country. These are my people.’”

During their time in the school the volunteer group was able to pack 600 emergency medical kits into cardboard boxes. They pinned on yellow paper sunflowers with a blue tag that said “peace,” and shouted in Ukrainian, “Glory to Ukraine! Glory to the heroes!”

They plan to return next week and keep packing donated supplies.

“It is so meaningful to have the support of non-Ukrainians,” Mykolenko said. “It makes us feel less alone — that there’s hope in the world.”

FRENCH TWIST — If Marine Le Pen becomes the next president of France, the European Union won’t collapse. Neither will the euro. There isn’t going to be a Frexit.But the far-right politician is a genuine threat to the liberal Western order. Here’s why you should worry she could win France’s...

(CelebrityAccess) – Former HIM frontman Ville Valo (VV) has announced a 2023 tour of the United States supporting his album Neon Noir. The Finnish singer/songwriter has confirmed his next album will be released in early 2023. In addition to the announced US dates, VV will also be hitting Europe and...